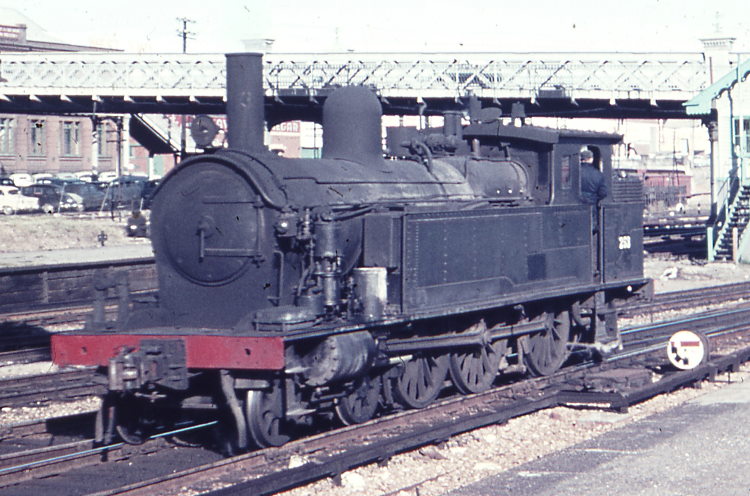 As Australian cities grew all state railway systems in Australia began to encounter the same set of problems when it came to the operation of their suburban rail systems.

Urban sprawl meant that suburban trains had to travel further than before. Increased population meant that loads were getting heavier as more carriages needed to be added and the small tank engines that had provided such sterling service were no longer capable of keeping up with the demands that were being placed on them.

Solutions were needed and, while the other states looked overseas for the solution, the South Australian Railways looked to their own designers and their own workshops and they weren’t disappointed.

The F Class to the rescue
Planning for a replacement for the SAR’s fleet of aging tank engines began around 1900 and in April 1902 F167 rolled out of the Islington Workshops. This rather attractive looking 4-6-2T loco was almost twice as powerful as the biggest suburban tank locomotive then in service and it was quickly adopted as the pattern for 42 more tank engines.

These 43 tank engines were able to cope with the demands of an expanding system that took suburban trains up into the Adelaide Hills and they were the main motive power for suburban trains right into the 1930’s and some were still being used on some suburban services during World War II.

However, by that stage members of the F Class were also being used on local goods services and on shunting rosters too.

Modifications
There doesn’t seem to have been any major modifications to the F Class once they were in service. Shortly after the end of World War II the pattern engine was fitted with a drumhead smokebox and a stovepipe chimney in an attempt to improve steaming but this work wasn’t extended to any other members of the class.

The class leader and six other members of the class were also modified to burn fuel oil when the supply of good-quality coal from New South Wales became a problem.

First on, first off
The first F Class tank engine to be withdrawn was the class leader on January 23, 1956 and other members followed over the next 11 years and in early 1967 two F Class locos were still in use as workshop shunters at Islington Workshops.

Preservation
Two of the Perry Engineering locos and one of the Martin and Co. locos have been preserved and one, F255 is on display at the Port Dock Museum.

The top photo on this web page is by Weston Langford.
They are licensed under a Creative Commons Attribution-NoDerivatives 4.0 International License.