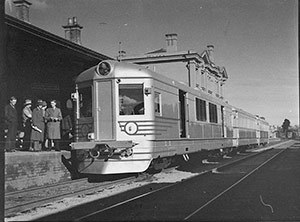 The requirement was for a train that would provide fast, reliable and comfortable travel for passengers who needed to get to Broken Hill … 970km from Parkes. It also had to be reliable and economical.

The result were 5 power cars built by the Railways own Eveleigh Carriage Workshops, 12 carriages built by Richie Bros of Auburn and 2 parcel vans built by Eveleigh Workshops.

The very first Silver City Comet consisted of one power car, one first class carriage and one second class carriage that also contained buffet facilities. It left Parkes on September 27, 1937.

A little over 62 years later the final service ran on November 3 1989. In those 62 years the power cars had only had one major rebuild.

The Silver City Comet always connected with the Central West Express … or it’s precursors … and in later years when the Express was changed to run to Dubbo instead of Parkes the Comet was extended to Orange to continue that connection.

More modern passenger trains and railcars came and went on other lines and the loco hauled Central West Express morphed into an XPT but the Comet kept on doing what it was designed to do. The fanfare and the novelty had worn off and their design was definitely dated but they were reliable.

One XPT driver who arrived in Orange for the first time in 1982 was surprised to see such an old train waiting on the other platform.

“I was in the cab of XP2006 on one of the early runs to Dubbo, nearly fell out of my chair when we pulled into Orange and I saw that at the other platform. I had no idea such trains still existed, let alone were in daily use in 1982.”

I took this photo of the Silver City Comet at Orange East Fork on its inbound journey in 1989. By that stage the cars that made up the Comet set had worn three different paint schemes.

The power cars
The 5 power cars were numbered 101 to 105 and were classified as the 100 Class with the coding PV although that coding was changed to PH fairly soon after their introduction. In the 1950s the four surviving power cars were rebuilt and coded as DP.

The original engine compartment in the power cars

As built these cars had cabs at each end and three compartments in between. The main compartment housed the engines … originally two inline 8-cylinder Harland and Wolff diesels.

The second compartment contained generator sets and other equipment while the third compartment was designed to carry the guard and up to 3.5 tonnes of luggage.

Power from the two diesel engines was transmitted to the inner axle of each bogie via a coupling to an overdrive gearbox and then to a Voith Sinclair Turbo Transmission. Two of the power cars had a top speed of 128km/h while the other three were limited to 112km/h.

The Harland and Wolff engines proved to be lacking in power and because of this the parcel vans were only used infrequently although they did see more use once the power cars were re-engined and lost their luggage capacity.

During the 1950’s rebuild the original engines on the four remaining power cars were replaced with four GM 6-110 engines. While the transmission components were changed the method of transferring power from the engines to the axles remained the same.

Extra room was needed to house the new engines and so the luggage space was absorbed into the engine compartment.

Interior of one of the Silver City Comet passenger carriages

Publicity shot of the interior of a Comet carriage

The parcel vans
While the power cars and carriages from the Silver City Comet were rarely seen in Sydney the parcel vans were frequent visitors to Central and even I recall seeing one of them around Sydney yard from time to time.

Operation
While these units were built for use in western New South Wales they were used at times in other parts of the state and at least one test run was conducted between Sydney and Moss Vale before the first unit entered service.

This has really only been a very condensed history of these unusual units and there is a lot more information available if you care to search for it.

The Comet arrives at Darnick near Ivanhoe.

The beginning of the end
The first power car to be withdrawn was PH105. It was destroyed by fire in January 1950 when it collided with a truck.

DP102 was the next to go. It was condemned after a level crossing accident in August 1982 but remained at Parkes until it was scrapped some years later.

DP102 outside the Comet shed in Parkes on August 31, 1982. Photo courtesy of Bob Richardson

The Silver City Comet made its last run in November 1989 and was replaced by a bus … a sad ending to a service that helped connect people in remote areas to the major population centres.

In 1963 DP101 had an altercation with a large truck … there are no notes with the photo to indicate where the accident happened but obviously level crossing accidents are nothing new.

Bibliography
All black and white photos come from the State Library of NSW and are used with their permission.